A two-day national seminar on the topic of ‘Quest for Survival of Languages of the Ethnic Communities of North-East India: In the Face of Globalization’ was concluded on Friday at Bodoland University in Kokrajhar.

It was organized by Centre for Bodo Studies(CBS) of Bodoland University, sponsored by BTC administration where over 70 scholar and participants from various states of the country and presented papers on various issues of languages of the ethnic communities of North eastern region during the seminar.

The seminar  was designed to intellectual discussion and discussed for protection, promotion and development of language of smaller linguistic communities residing in North East India whereby, which is highlighting to the preservation and documentation of rich linguistic heritage of multilingual India.

BTC Chief Hagrama Mohilary inaugurtaed the seminar yesterday in the presence of participant and scholars from states of the country.

30 Nov 2014 - 9:20am | AT News
Dispur demands sophisticated weapons for the police to efficiently deal with the militant outfits operating in Assam.In his memorandum to prime minister Narendra Modi, chief minister Tarun Gogoi said...

3 Mar 2014 - 7:49pm | AT News
Many KMSS activists have staged five hour long dharna at Gorchuk area in the city demanding immediate release of Akhil Gogoi who was arrested on Sunday along with five other leaders.Talking to Assam... 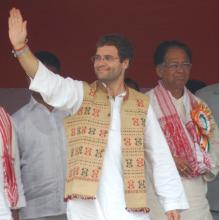 20 Apr 2009 - 9:35am | editor
Congress star campaigner Rahul Gandhi says India will be shining only when it will be able to eradicate poverty and unemployment.Addresing an election meeting at Lakhimpur on Monday, he said poverty...