Guwahati turns into a security fortress with army, police  and para military forces pounding on the vital spots fearing terror strike by L-e-T in the run up to the Independence Day celebration.

Vital roads and rivers, rail and bus stations, temples and mosques, Dispur and Cotton College are being heavily guarded apart from air and river surveillance to thwart the inimical attempts.

Police have inputs that a group of L-e-T militants is waiting to strike in the city.

A dreaded militant popularly known as Raju is leading a group of armed youths targeting some major spots in the city.

16 Dec 2015 - 10:36am | AT New Delhi
Assam Chief Minister Tarun Gogoi is all prepared to stage dharna in front of Parliament on Wednesday alleging non receipt of central funds to the state. Party MPs from both the Lok Sabha and Rajya...

24 Mar 2014 - 8:14pm | Raktim Baruah
A weeklong art workshop for children and young people was inaugurated on March 24 in the city. Organized for the time the workshop targeting non-artists was inaugurated by Krishna Goswami, professor... 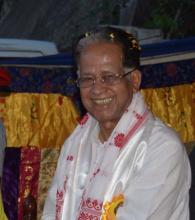