Yhome F.C thrashed Phezhu boys club Jotsoma 4-0 in the first football match at Kohima local ground on Thursday. Vilhoubutou opened the account of Yhome F.C in the first 13 minute while the second goal came through the boots of Kedoniezo at 32 minute. The third goal was struck by Minolie in 41 minute and the fourth goal came in 65 minute.

The second match was played between 10th NAP (IR) and ICFAI University FC Dimapur. The score was drawn and Yeihwang Bohayon jersey no 7 of 10th NAP was caution yellow card. The match was later decided through by the tie breakand 10th NAPwon by5-4.

The third one match was played between Sechu-Zubza youth orgaization and Naga Boys club(1st batch), Thejavilie opened the account for Sechu-Zubza, second goal came through the boots of Petevikho, third goal was netted by Akhobou and in the second half Choulavolie netted the fifth first goal for Nagaboys and the fourth goal for Sechu-Zubza came from theboots of Zhavilie.

6 Jun 2013 - 6:27am | Koushik Hazarika
Assam Combined Entrance Examination (CEE) 2013 result will declared on Thursday for admission in MBBS/BDS/BE/BTech courses for academic year 2013-14. This year's Assam CEE examination is conducted by...

No silver lining on Langpi logjam

20 Nov 2008 - 9:06pm | editor
Assam and Meghalaya on Thursday have failed to get a silver lining in the border dispute centering around Langpi. Participating in the meeting at Byrnihat, Meghalaya Chief Secretary Ranjan Chatterjee... 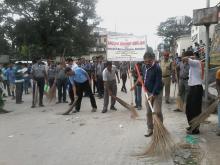 13 Aug 2016 - 3:30pm | AT Kokrajhar Bureau
A cleanliness drive was carried out in Kokrajhar town under Swacch Bharat Abhijan on the eve of 70th Independence Day celebration today to make dirty free neat and clean environment among human life...