After a brief lull, poachers have struck again in Kaziranga leaving a full grown rhino killed in the world heritage site. The incident took place in Burhapahar range where the poachers have killed the animal.

But they failed to take away the rhino as the forest guards reached the spot as soon as they came to hear the sound of gun firing. This was followed but a fierce gun fight where the poachers managed to vanish from the spot.

29 Nov 2007 - 9:12am | pbaruah
The All Assam Adivasi Students Association gives a 48 hour deadline for the government to clear the whereabouts of 32 protesters who they claim, have been missing from the violence spot on the...

24 Apr 2016 - 11:22am | Rituraj Phukan
The Guwahati Tiger Fest was organized at the Royal Global School to coincide with Earth Day 2016. The Tiger Fest was the culmination of the Sanctuary Asia Aircel Kids For Tigers programme for the... 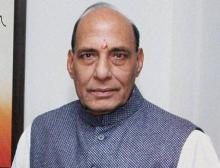 No reason to be worried over NRC

4 Jan 2018 - 10:42pm | AT News
NEW DELHI: Union home minister Rajnath Singh said no Indian living in Assam would be left out in the updated NRC in Assam. Replying to Saugata Roy of Trinamool Congress in Parliament on Thursday,...