The new committee of the All BTAD Minority Students Union (ABMSU), which was formed recently in its annual session in Udalguri, took oath of office on Sunday  at a programme held Kashipara union office in Kokrajhar. Moynul Haque, founder president of the students union and chaired the session, administered the oath taking ceremony in the presence publics and union members.

Sayed Sahabudding Sheik and Lafikul Islam Ahmed, president and general secretary, both retained their portfolios for second term respectively took oath of office and secrecy along with other executive members. Sheik and Ahmed said that the students union wax working for the welfare of the community in the region to build a healthy society.

The leaders have eyed equal and integrate society among various communities resides in the region as well in the state to gain more development. The students union leaders urged govt to take firm actions against rising jehadi and militancy activities in the state which are creating resented.

6 Jul 2007 - 8:38am | editor
The Bangladeshi immigration is continuing unabated in the Northeast. In what was considered to be a problem primarily in Assam seems to be extending to the other states of Northeast as well. The... 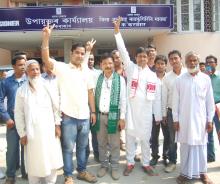 25 Mar 2015 - 9:16pm | Hantigiri Narzary
As many 85 candidates from various parties and independent including BPF, Bjp, Congress, Aiudf filed their nomination papers for 12 constituencies under three subdivisions Kokrajhar, Gossaigaon and...

Earn during graduation in Genpact

30 May 2007 - 5:30am | editor
The programme at Genpact allows candidates to work and earn a Bachelor of Commerce (with Computers) degree simultaneously. Aimed at students who have completed Class XII and are in the process of...