Focus on UPF role in Dispur

United Peoples Front (UPF) claimed on Monday that it would play a prominent role in the formation of the next government in Dispur. Talking to reporters after addressing a rally in Chirang, the working head of the newly floated party said UPF will contest in 35 seats.

“I believe that our party will be showing good performance in the autonomous council areas. UPF is a common platform of the councils in the state,” said Dr Rongpi. He said he was confident UPF will win in all contested seats and play a key role in the formation of govt.

4 Jul 2010 - 10:13pm | Anup Biswas
The DHD(J) has given the indefinite Dima Hasao Bandh in protest against the arrest of Niranjan Hojai, C-in-C and Jewel Gorlosa, Chairman, DHD(J) and non- fulfillment of their demand by the... 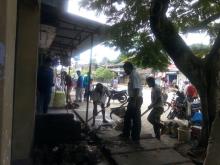 3 Oct 2017 - 9:52am | Ranjanjyoti Mahanta
As part of the nationwide 'Swachhta Hi Seva' campaign to commemorate the 148th birth anniversary of Mahatma Gandhi,under the aegis of Raha revenue circle and in joint collaboration with  Raha...

16 Sep 2011 - 8:56pm | Mowsam Hazarika
DR. Pradip Kumar Sarmah, the founder of Rickshaw bank was today named as a laureate of The Tech Awards 2011, one of 15 global innovators recognized each year for applying technology to benefit...