A Adindu of Coochbehar Municipality netted first goal against Bongaigaon in 30 minutes and led thd match 1-0 in the first half.  For Bongaigaon, Joseph Frank scored first goal in 47 minutes, Sukursingh Basumatary scored two goals in 62 minutes and 65 minutes in the second half which led the team to win the match 3-1 and forwarded for another round.

16 Mar 2016 - 12:02am | Hantigiri Narzary
An election awareness meeting involving officials from district administration, sub-divisional and officer in charges and members of various monitoring teams on Systematic Voters’ Education and... 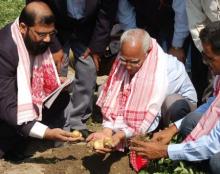