Despite tough measures to foil the bandh, normal life remains totally disrupted following a 12 hour Itanagar bandh call on Monday. Called by the All Nyishi Youth Association, the bandh has evoked full response where vehicles, mostly, are refusing to ply on the streets. Shops and markets, schools and colleges have been remaining closed from the morning.

Thin attendance of staff makes it difficult for banks and offices to ensure normal functionings.  With this bandh, the organization demands construction of 4-way lane road from Itanagar to Banderdewa, repeal of Arunachal Pradesh Unlawful Activities act 2014, construction of Green Airfield at Hollongi and others.

Notably, the district administration announced tough measures to foil the bandh. Calling it an illegal, the authorities threatened to take strict action against the enforcement of the bandh. 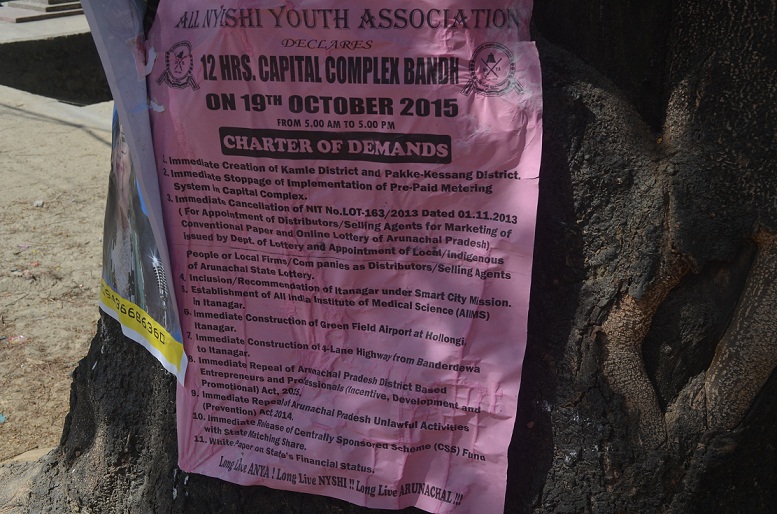 31 Dec 2012 - 10:26am | editor
Amid mounting protest over repeated rapes and molestations, protestors in Guwahati on Sunday vowed to put the government under pressure to change the laws to punish the rapists and molesters. SUCI...

Protest by teahchers at nazira

19 Sep 2013 - 9:49pm | SK Hasan
64 elementary teachers of Nazira who were appointed under operation black board scheme were not paid salaries for last 19 months. While protesting on Thursday, they have destroyed the block...

18 Feb 2012 - 2:58am | editor
The Kamrup Chief Judicial magistrate on Friday remanded Anuj Basumatary, Gurdev Singh, Rajendra Pratap Singh to police custody for fourteen days a day after they were arrested for kidnapping two...