The second general convention of the All Assam HS Teachers & Employees Association, BTAD Cell was concluded here at Kokrajhar Girls' HS school with daylong programme scheduled in Kokrajhar on Monday.

A new executive committee of the association was formed with Santola Basumatary as chairman and Davidson Daimary as convenor along with 13 executive members through the delegate session.

At least six resolutions were adopted in the session through the discussion on various issues and problems of the teachers & employees, which included organizing of inter school tournament, constitute of BTC level teacher's award, production of subject wise books in the region, appointments of teachers in the region against vacant posts are prominent resolutions.

Over 150 delegates from 48 HS Schools from four districts of BTAD participated in the session and discussed on the issues and problems.

A souvenir was also released on the occasion which was unveiled by Kanan Basumatary, president of the reception committee.

An open session was also organized to mark the convention with Santola Basumatary in the chair.

13 Sep 2015 - 10:46pm | AT News
The footballers died when the vehicle carrying them along with ten others collided head on another goods vehicle in Sonitpur district on Sunday.The tragic incident that left 12 others injured took... 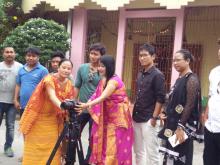 11 May 2017 - 7:49pm | AT Kokrajhar Bureau
A new video film will hit the screen to entertain the Boro people in Assam. Courtesy RB Film Production. Social activist Rajyarshi Basumatary switched-on the camera to inaugurate the Mohurot for the...