All kinds of road transport communication, business institutions like bank, bazaar, market, shop were remained closed during the bandh which was started from 5AM today.

Main road in Kokrajhar along with 31C national Highway was look deserted following the bandh. Most of the govt offices saw a thin attendance. However, some of private vehicle are saw plying in the roads and emergency services like medical, water supply were exempted from the purview of bandh.

B Kwirwm Dwirwm, secretary of thd ABSU said that the bandh has been called to put pressure govt to create new states in the country to meet good governance and healthy administration.He has slammed govt for not taking any step to solve the issues of Bodoland, which is a long standing demand. He said that ABSU and it's demand group will continue their demand till achieved in its goal.

17 Feb 2017 - 9:36am | AT News
The Arunachal police have grilled Sanjay Raj Subba in connection with a cheating and fraud case after they arrested the former Congress MLA from Naoboisa on Thursday.A team of police from Sepa rushed... 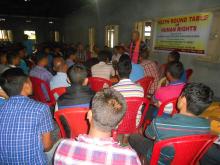 Round table on human rights

5 May 2016 - 8:46am | AT Kokrajhar Bureau
The North East Youth Foundation (NEYF) in association with Kokrajhar district committee of All Bodo Students Union(ABSU) organized a round table discussion on human rights at Bishmuri anchalik ABSU...

8 May 2015 - 6:43pm | Hantigiri Narzary
The Kokrajhar District administration today extended ex-gratia to the next of kin of the thunderstorm survivors of the district. Thaneswar Malakar DC Kokrajhar visited the thunderstorm...