All BTC Modern song competition is being organized by Khagrabari Sports Association of Udalguri Khagrabari Janta High School playground with a four-day programme from January 6 to January 9. A total of twenty competitors,five from each of the  BTAD districts,will take part in the competition.The competitors can also sing modern songs of various languages. A team of experts will judge and select three of twenty competitors as winner and first and second runners-up .

12 Oct 2012 - 3:55am | editor
Hundreds of pro talk NDFB leaders took out a huge bike rally in Kokrajhar on Thursday demanding safety and security for tribal people in the BTAD areas. The rally was flagged off by Peoples... 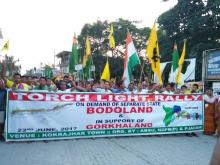