At a time  when preparations are afoot to be unified  in between BPF  and BPPF on Sunday at Dotma Tulungapuri in Kokrajhar, the BJP and AIUDF parties have termed that the unification move is a drama one, besides it would not be benefitted to the  party in the political ground in tgd Bodo belt as BPPF itself lost people's mandate.

Former BTC executive member and BJP leader Mono Kumar Brahma has termed that the unification move in between BPF and BPPF party is a tactic of political drama to gain peoples support. It is nothing, but a political scenery only among public, Brahma slamming Rabiram Narzary, president of BPPF said that Rabiram is joining the BPF party for his personal interest, not for common masses. Rabiram's joining in BPF will badly impact in days to coming as he has lost peoples mandate in last elections, Mono said.

Brahma also told that decade ago, both Rabiram Narzary and Hagrama Mohilary were main creator of separate parties and fraticidal incidents in the region, but now they are going to shakes hand each other to show their political lobbies, keeping common publics on dark. The BPF could not be gained their party strength and status, though party is going to unified ahead Assam Assembly elections. It is a political motive and hiding agenda of the leaders of BPF party, he alleged.

BTC MCLA and AIUDF leader Abdul Ali Mondal, expressing his reaction to the unification move in between Hagrama Mohilary and Rabiram Narzary, is only a step to show their aspects. He said that presently Rabiram has lost his public support, so he going to join with BPF party. BPF will face tough after joining the party as because common masses will turn other parties.Mondol also claimed that his party will gain it's party based among common citizens in the ensuing assembly elections.

11 Apr 2014 - 8:40am | AT News
At least five persons sustained serious burn injuries when a market caught fore in the outskirt of Guwahati on Friday.The incident took place at Sontoli in Boko where a devastating fire broke out in... 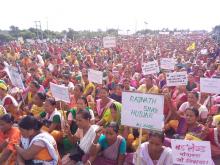 28 Aug 2017 - 10:55am | AT Kokrajhar Bureau
Road communication was totally disrupted since 5 am in the morning due to National Highway blockade by women in support of Bodoland state creation along the National Highways at Kajalgaon in Chirang... 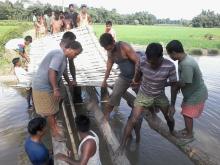 Warning against govt in BTAD

13 Sep 2015 - 9:19pm | Hantigiri Narzary
The local residents of Fakiragram staged demonstration on Sunday focusing bad roads and bridges. They further warned the authority of refraining from exercising their franchise in the next assembly...