LDP Condemns BJP President  Amit’s Shah Statement where he had said BJP will stop infiltration from Bangladesh to Assam, If BJP will come to power in Assam. LDP reminds the people of Assam that before 2014 General Election Narendra Modi said that Bangladeshis should pack their bag as they cannot live in India after 16th May 2014. But when Narendra Modi became Prime Minister, BJP Government does nothing in this regard.

Again just before Assam Election, now Narendra Modi has sent Amit Shah to make people fool. LDP asked BJP supremo it is the duty of Central Government to stop the infiltration. If the BJP will led the Assam Government how the state machinery will stop the infiltration. Do the BJP feel that the people of Assam is still fool or they think themselves very clever.  Stopping infiltration was an objective of the Assam accord. Who was the Assam Accord minister in the last 10 years? Himanta Biswa Sarma! Citizenship should be a matter of political patronage. The NRC should be the only arbitrer of citizenship. It seems it is just an election gimmick.

Scholarships for young writers and researchers

24 Mar 2012 - 4:16am | editor
Dispur is all set to encourage young writers and researchers with scholarships. But the topic should be on the indigenous issues confronting the state for years. Disclosing this, education...

20 May 2010 - 2:44am | sankal
It's a godwill gesture to the kidney patients of the state that from now onwards the Assam Government will be bearing a cost of Rs. One Lacs for kidney transplantation. Declaring this at a... 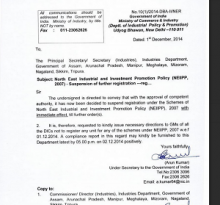 3 Dec 2014 - 10:24pm | AT News
After years of will-it-won’t-it, the Centre finally has suspended the North East Industrial and Investment Promotion Policy-2007 from December 1. Ministry of commerce & industry confirmed it with...