Cross border terrorism, infiltration and Indo-Bangla border fencing will be dominating in the discussion between Indian foreign secretary Shiv Shankar Menon and his Bangladesh counterpart Mohd Touhid Hussain, in New Delhi on Wednesday.

According to information, New Delhi is all set to press Dhaka to act against such elements in view of the revelation of Bangladeshi link being found to several terror incidents in India. Menon is expected to take up the issue of Bangladesh being used by terrorists as a base or route to reach here and carry out anti-India activities.

A number of terror attacks that have taken place in India have had linkages in Bangladesh, causing concern here. Infiltration by militants via the Bangladesh border is easier as it is a porous frontier. Work is on to fence the border but there are some places where fencing cannot take place at a distance of 150 yards from the boundary as laid down by the international norms due to hill tracts and water bodies. In this aspect, India is seeking cooperation from Bangladesh to allow it to set up the fence.

Permalink Submitted by karuna on Thu, 06/11/2008 - 20:24
Infiltration from Bangladesh cannot be stopped until and unless corrupt BSF personnel guarding the border are brought to the right track. This force is helping arms smuggling, cow smuggling as well as infiltration by taking bribe from the infiltrators. So far border fencing is concern, some land has to be acquired from its rightful owners and before acquiring it by the district administrations the govt. has to notify it in its official gazette. Proposals submitted by the district administration for publication of notification are lying pending at government press since long. So how can one hope that the fencing will be completed within a stipulated time? It is a serious matter to be inquired in to.

24 Jan 2014 - 2:19pm | AT News
Two persons were killed when a car carrying them exploded in Karbi Anglong district on Friday.The car explosion took place at Seventh Mile area near Umrangsu when the duo were believed to have been... 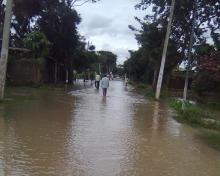 4 Sep 2015 - 9:32pm | AT News
Chief minister Tarun Gogoi on Friday made an aerial survey in the flood affected areas in Dibrugarh, Dhemaji, Lakhimpur, Tinsukia and Sivasagar.He asked the authority to intensify relief and rescue...