The United Liberation Front of Asom (I) has pledged to prevent the move to auction 12 oil fields in Assam.

In a strongly worded statement, the outfit’s publicity secretary Aronodoy Asom called it an anti-national steps and that the nation and its wealth are not at all safe at the hands of Delhi.
He said that the people in power at Dispur should not allow it to happen in the name of royalty.

“If Britain can pull out of the European Union with the help of a referendum why Delhi and Dispur can’t resolve the Indo-Assam conflict?,” said the ULFA(I) leader. 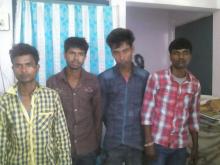 26 Oct 2015 - 7:34pm | Hantigiri Narzary
The Kokrajhar police have arrested two more people for trying to extort money from a contractor of NTPC in Salakati. Two others were held on Sunday night from Basugaon town of Chirang district....

26 Dec 2017 - 12:02am | AT News
MARGHERITA: Ten days after ULFA-I kidnapped him at gunpoint, Arunav Phukan has reached his home in Jagun unhurt on Monday morning. A team of security force, relatives have brought him back his...