A powerful explosion rocked Tinsukia on Thursday a day after ULFA(I) along with a few other like minded outfits warned the people in general to stay away for the Independence day celebrations.

The Thursday’s incident took place in Badalbheta Tea Estate in Doomdooma area where the suspected militants exploded an IED inside a drain along Philobari bypass road at 7.30 in the morning. Here is, however, no casualty in the incident.

But the security forces are fanning in and around the entire area to nab the militants who exploded the IED in the run up to the Independence Day celebrations. 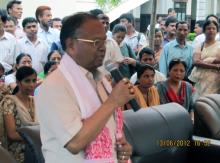 14 Apr 2008 - 6:33am | Rituparna Goswami Pande
“When bamboo flowers, famine, death and destruction follows”, says a tribal legend in Mizoram. Who better than the hardy Mizos would know this, considering that theirs is probably the...