Speakingon the ocassion Rabindra Kr Sarmah HOD Dept of English "Students union in present day have turned are just for the sake of the name. Only holding academic curriculum is not sufficient. "He stressed the need of building leadership quality in grassroot level." Chandan Baruah HOD Dept of History also expressed great hopes from the new representative body.

The programme was also attended by staff and a large number of students. Along with 12 elected students representatives of various portfolios. 32 nominated class representatives also graced the event.

Principal Dr. Prasen Daimari asked them to maintain a positive atmosphere and assured them help and support in lifting the college to greater heights. Ghanashyam Hazarika offered vote of thanks at the end.

13 Jan 2012 - 11:27pm | pallavibarua
In the 7th century AD, when Buddhism was strengthening its hold over North India, a group from the priest class forwarded a new concept to arrest the growth of Buddhism. Gautam Buddha was declared... 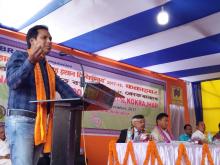 National Expo going on in Kokrajhar

25 Nov 2017 - 9:52am | AT Kokrajhar Bureau
A national handloom expo -2017-18,Kokrajhar is going on at the Rashmela ground in Kokrajhar. The expo was organised by BRAWFED in association with development commissioner for handlooms, ministry of...