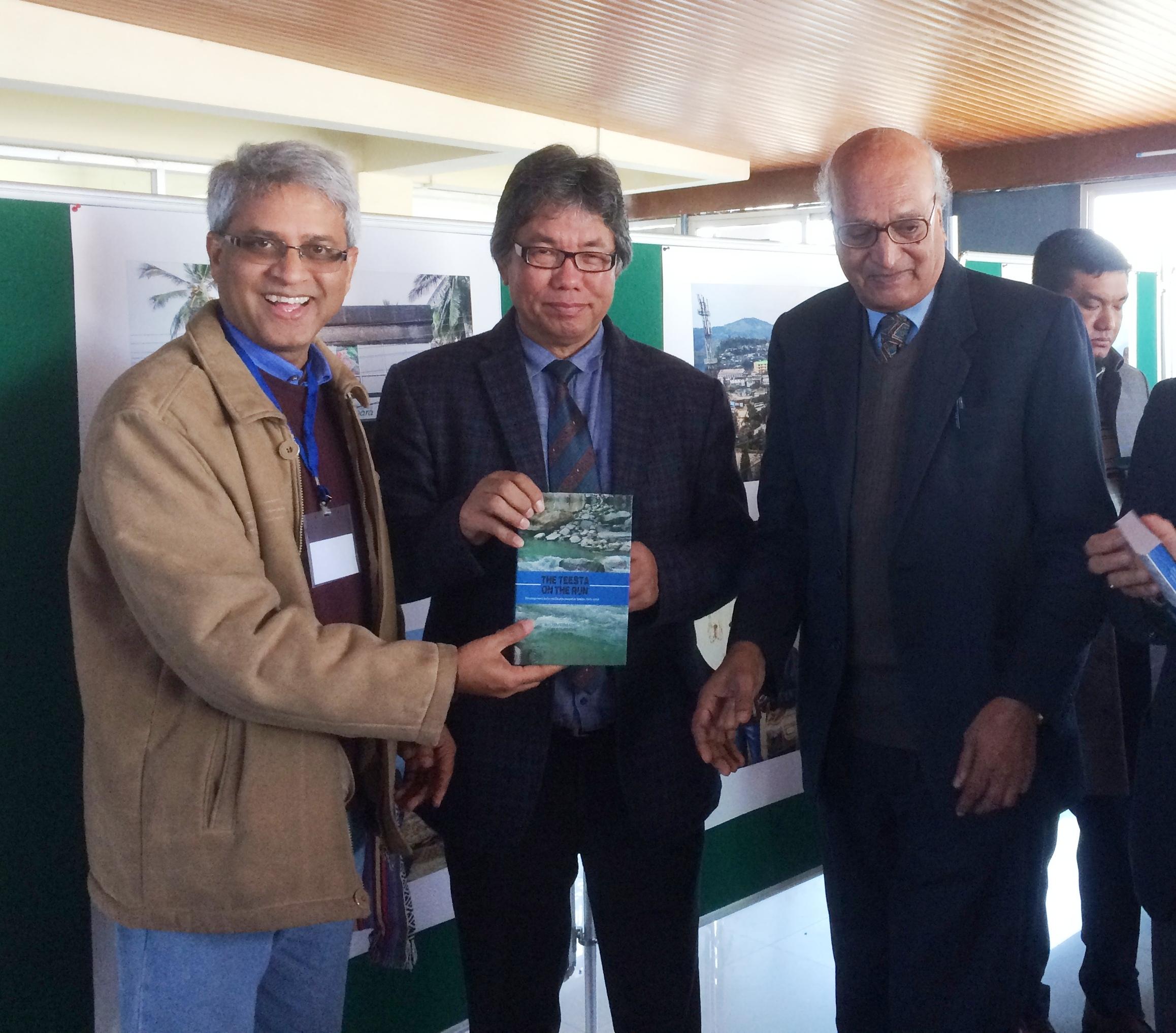 A major study on displacement of peoples in Sikkim was released at a 3-day International Seminar on “North East: Peoples, Power and Perspectives” held at Sikkim Central University, Tadong.
At the inaugural session of the seminar on 24 November 2016, Vice Chancellor, Prof. T.B. Subba released the Jesuit-Salesian authored book Teesta on the Run: Development-Induced Displacement in Sikkim, 1975-2010.

The Department of Economics, Salesian College Sonada assisted the Director of North East Social Research Centre, Guwahati, Dr Walter Fernandes in the research project funded by ICSSR, New Delhi.
The field work included gathering the land alienation for various projects from the district level land records and gathering the status of the displaced persons from over 300 interview questionnaires undertaken by a team of four researchers.

Jesuit Father (Dr) Fernandes at his intervention prior to the release of the book highlighted the findings of the study saying, “Sikkim, has had 10% of its relatively small population in the mountainous state displaced and the vast majority have not been adequately compensated nor rehabilitated.”

The 352-page study was part of an All India effort to create a reliable data base with the hope of making a contribution to awareness building among the Displaced Persons - Project Affected Peoples and decision makers about the need to develop policies in favour of the marginalized.

Dr Fernandes is former director of Indian Social Institute (New Delhi) and 22 years editor of Social Action (1977-99) as well as founder director of North Eastern Social Research Centre (NESRC) Guwahati (2000-11) and director of research at Animation and Research Centre, Yangoon (2013-15). He is at present Senior Fellow at NESRC.

Principal of Salesian College Sonada-Siliguri and author of Vision from the Margin (2007) Prof Thadathil has five edited volumes and over 30 published articles. He is also the series editor of SALESIAN - Journal of Humanities and Social Sciences, and director of Salesian Research Centre.

Even though the Supreme Court interpreted Article 21 of the Constitution on right to life as every citizen’s right to a life with dignity, studies indicate that those who pay the price and get the benefits of development belong to two different classes.

Dr Fernandes says, “That possibility turns displacement into a human rights issue and provides socially conscious scholars with a platform to intervene in the debate on the impact of development on the livelihood losers.”

In 2014-15, the above study’s Sikkim section was separated and updated to 2010, and is published in the present volume.

While chapter 1 gives the core concepts, chapter 2 discusses the methodology of study and chapter 3 presents the background of Sikkim. The remaining chapters give quantitative data on land loss and displaced people. The concluding chapter has suggestions for conclusive development.

Most decision makers view development only as economic or GDP growth and building infra structure and consider displacement linked to it sad but inevitable.

On the other side those who want inclusive development hold that economic and social growth should go hand in hand and that one cannot be sacrificed for the other. They are of the view that in the present situation those who are deprived of their sustenance in the name of national development and those who get its benefits belong to two different classes and that the former are impoverished for the comforts of the latter.

The study on which this publication is based tested this hypothesis through a quantitative data base on the extent of land used for projects from 1975 to 2010 and the number of displaced persons. It then looked at the impact on those who pay the price of development.

In the end, one is left with the impression that the GDP growth based view prevails in development planning in India. Hence, the authors recommend new approaches to be found not merely to rehabilitation but also to the laws and to technical aspects of the project that deprive people of their livelihood.

12 Sep 2015 - 11:27am | Hantigiri Narzary
The All BTAD Minority Students Union (ABMSU) strongly protested and warned for vigorous agitation against the decision move to grant entry and right to stay to Hindu migrants from Bangladesh and...

8 Jan 2012 - 2:10am | Anup Biswas
The ‘SNGI LUM LANG’ festival of Jaintias residing in Dima Hasao District of Assam is celebrated at Jatinga Village on January 7th with traditional fervor and gaiety. This ‘...