Cashless economy is set to grip Assam after the  demonetisation dilemma hit the people hard. With hardly options at hand, the people are gradually preparing to go with the digitalized or e-payment. This is what the impression of a fair in Nagaon which evoked considerable response on Saturday.

Dip  Das, a resident of Raha in Nagaon district is quite impressed with the cashless system. Talking to Assam Times in the day long fair he said that it would help the society curb corruption.

“I am happy with the system. It would be of immense help to weed out corruption. We need not make any queue in the banks while mobile is the tool for the purpose,” said Das.

Debashis Medhi from Nagaon is also happy to have seen the system. He maintained that the system is getting overwhelming response. He said, “people are well prepared to welcome the system. The illiterate  lots should be taught and many people even today can't use ATM. A system has to be there to help them learn the things.”

Equally hopeful is Guluk Kakati from Raha who was in the fair to catch a glimpse of the stalls where cashless economy was a dominating discourse. According to Kakati,” cashless payment system at least will mark an end to the dominance of brokers and middlemen.”

“All government transactions for the poor people should be cashless or must directly deposit in the bank accounts. This is a step forward to curb corruption,” said Kakati.

Many PSU banks, private banks and non banking establishments participated in the fair organized by the district administration.

12 May 2014 - 8:37pm | AT News
No major setback awaits Congress in the Lok Sabha polls if the exit polls are any indication.CSDS-sponsored exit poll has projected 40% vote share for the ruling party 1% up from 2009 Lok sabha polls... 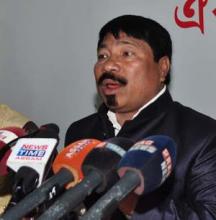 3 Mar 2016 - 11:21am | AT News
Finally, AGP inks poll pact with BJP where the regional party remained satisfied with 20 seats to contest in the upcoming assembly polls. In eight assembly seats both the parties will be in the...

23 Oct 2013 - 12:28pm | AT News
The killer dengue continues to unleash terror in the state. The latest victim is a girl in Lakhimpur. Identified as Ilora Marang, the fashion designing student in Guwahati stayed in Zoo road area...
Follow @Assam Times