At-least 30 pairs, economically poor people’s from Adivashi community tie the knot from Nayekgaon,Salakati,Harinaguri, Shiljan,Dholmara area of Kokrajhar district at Paharpur Mwnzgithan(Mandir) witnessing huge gathering of citizens on Thursday in Adivashi rituals. The priests performed the wedding ceremony as groom and bridegrooms were dressed new clothes to get married on their life.

The community wedding was organised by Doneswar Goyary,BTC executive member to give a community service among economically backward peoples in the region. It is a first ever community wedding function being organized in Kokrajhar, which has created an amusement among all sections of communities.

Newly married couples expresses their happy over getting publicly wedding said that it is a happy moment for their life as peoples come forward to serve peoples’ welfare.

‘I am very happy today being getting new life through community wedding at Paharpur Mwnzhithan. I am tie the knot with my life partner as per social tradition’, said Mangal Kisku, newly married person.

Budhin Murmu, a bridegroom from Paharpur village said that she come from a poor family, today got an opportunity for mass marry in her life.

Goyary said that he and his colleagues organized the mass wedding function for poor families, who are hand to mouth in their life.

‘Today peoples from greater Nayekgaon area are seeing happy with mass marry as they got tie the knot publicly’, Goyary added.

Peoples from all sections of communities, especially Adivasi peoples have lauded the initiatives for publicly wedding ceremony that brought an integration and unity in the region.

Matla Hembrom, social activist appreciated organizers for holding such social initiative for poor peoples in the region which give new aspiration. Rajendra Boro, social activist also hailing the mass marry function said that it is an example of social unity that brought peace and integration among society.

Two couples were stopped form getting married due to  under age. 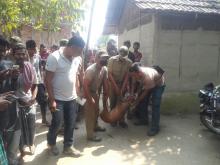 17 Aug 2009 - 4:14am | editor
Two suspected cases of H1N1 infection have tested negative in Assam hardly 24 hours after the state confirmed its first patient of the kind. Two persons, suspected to be infected by the killer swine...

12 Apr 2014 - 9:03pm | AT News
A heavy gun battle seems to have pressed no less panic button along the Assam-Nagaland interstate border in Karbi Anglong district on Saturday.The fierce exchange of firing took place atop the...