The Golaghat district administration steps up initiatives to provide the inferno hit people in Rangoliting relief materials who have been taking shelter at a local school.

According yo the district administration, GR items have been provided to the inmates of the relief camp, a total of 11 families consisting of 47 persons in all (37 adults and 10 minors).

Basic facilities such as drinking water, blankets have been provided to the inmates and electricity to the area has also been supplied.

Moreover, a health camp has been set up with health department officials frequently visiting the camp apart from s veterinary camp has also been set up in the vicinity.

The next of kin of three deceased, Juntora Bhuyan, Belmoti Bhumij and Dipok Bhumij, have been given an ex-gratia of Rs 4 lakh each.

The next of kin of two other deceased, Bimal Bhuyan and Lalita Bhuyan, have not been identified so far.

The injured have been given Rs 4,300 each for their treatment.

Khagen Bhumij who was injured in the incident has been released from the hospital post treatment. Two others, Binod Bhuyan and Matu Bhuyan are still undergoing treatment.

7 Sep 2017 - 10:39pm | AT News
Spiritual leader Ravi Shankar on Thursday evinced keen interest to broker peace with the rebel groups operating in the north eastern region.  Talking to media in the sidelines of... 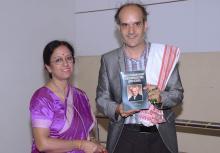 Book on philosophy released in Delhi

21 Apr 2011 - 2:35am | editor
Eminent art critic and cultural activist Shanta Serbjeet Singh will attend the ‘Guest of the Month’ program of Guwahati Press Club on April 23 at 2.30 pm. The elected Chairperson of...