ULFA(I) confirms patch up with CoreCom

ULFA (I) on Thursday vowed to continue it's good relation with CORCOM rebels in Manipur suggesting more joint strike in the two north eastern states.

In a joint statement released to mark ULFA (I)’s Army Day, chairman Abhijeet Asom and commander in chief Paresh Baruah said the people belonging to both the states are united.

The duo said that the Operation Barak launched with the help of CORECOM put the army chief in flutter forcing him to rush to Tepur.

The statement suggested ULFS(I)’s joint armed struggle and strike with CoreCom for the days to come. 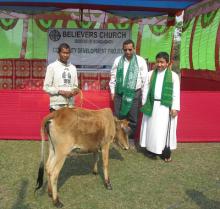 31 Jan 2017 - 1:42pm | AT Kokrajhar Bureau
At-lesat 200 economically disadvantage families of Kokrajhar and Chirang districts given away income generating livestocks to generate income and make life better to endeavor in spheres of socio-...

16 Sep 2012 - 3:42pm | Monali Kakoty
Internally displaced women represents the epitome of the marginalization and the disenfranchisement of the dislocated in South Asia. Their identity and individuality are collapsed into the...

13 Jun 2014 - 8:58pm | AT News
The mortal remains of Khagen Mahanta consigned to flames on Friday a day after the folk song exponent passed away at his own residence in Guwahati. His son Angarag Mahanta lit the funeral pyre at a...