Sensation prevails here at Raha on Monday after a 30-year-old woman allegedly poisoned her two children before attempting suicide at her residence in Bamunia Gaon at Raha on Sunday night.

According to police, the 30 year old mother , identified as Sadhani Das poisoned her children, Ratan ( 7 ) and Rupamoni ( 5 ), before consuming it herself. Her husband,  Ranjit Das, a security guard, has been working in Hydarabad for the past  2 years .

According to  neighbours , On Monday morning, when they did not see anyone of the members of Sadhani Das woke up, they went to her house to give them a call , they found the door locked from inside. As there was no response to their knocking on the door, they thought the trio was asleep. So, they left the place and returned after a while to find the house still locked. When they peeped through the window, they found the mother lying on the bed along with the son in a critical condition. But they could not see the daughter with them.

Later the neighbours informed the police, who broke open the door and found the son dead. The police immediately sent the mother to Nagaon Civil Hospital in a critical condition. Preliminary investigations revealed that Sadhani Das had poisoned her children first and later, consumed it herself.

Meanwhile search operation for the missing daughter launched by Raha Police is still on. The SDRF team from Raha Fire service office also launching search operation on the river Kolong suspecting the mother could threw her daughter into the river before attempting to kill self. The police is yet to ascertain the reason behind killing of the children by their own mother.

18 Nov 2016 - 3:17pm | AT News
Amid a mammoth security arrangement, Lakhimpur is holding its Lok Sabha by polls where 15,11,110 voters are exercising their franchise to decide on the fates of 5 candidates on Saturday. Voting is... 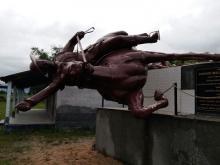 30 May 2012 - 3:48am | editor
Within a brief spell of one month the killer spiders have reached Guwahati. One person has been injured when two venomous spiders attacked him on Monday night. The incident of spider attack took...