To encourage artistes in different fields by honouring their talent, the Uttar Purbanchal Prerona Samannay Unnayan Charitable Trust had been giving away awards in memory of Phuleshwari Deka from more than a decade. This year, a total of 30 such artistes were conferred with the awards.

The trust conferred the Silpi Prerona Award 2017 to Gyanendra Kr. Chaliha who has immensely contributed in the field of fine arts and culture, sangeet and drama. The award was conferred at a ceremonial function held at Pensioners Bhavan, Chandmari in Guwahati recently.

The programme was attended by eminent artistes, litterateur and journalists with noted contribution in the fields.

Chaliha, a resident of Tangla town, has earlier been honored with the titles of  Sangeet Nipun by  Bhattkandey Institute of Lucknow,  Sangeet Bhaskar by Prachin Kala Kendra Chandigarh, Kala-Shree by Creative Art Academy, New Delhi and Kala-Vhibusan by Abantika Institute.

Chaliha is currently serving as Fine Arts instructor and Assamese subject teacher at Maharishi Vidya Mandir ,Tangla, besides acting as Principal at Sangeet Maha Vidyalaya, Saru-Kala Vidyalaya of Tangla. He is the secretary of the Asom Sankristik Mahasabha ,Udalguri district committee.

14 Jul 2012 - 10:22pm | editor
Three suspected NDFB cadres were gunned down during an encounter with security forces in Goalpara district on Friday. According to police, the encounter took place during an operation in Salpara... 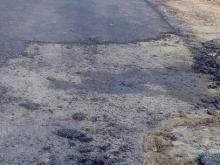 What turned road to death trap

12 Jan 2018 - 7:07pm | AT News
MARGHERITA: The much-hyped fresh lease of life in the country's surface communication sector has been proved a futile one if one travels on the Margherita-Pengree Road. The local residents reposed...

23 Dec 2016 - 9:50pm | AT News
In a bid to minimise the man-elephant conflict in the greater Numaligarh area the Kaziranga Wildlife Society conducted interaction programmes between the villagers of affected villages and wildlife...