Parag Kumar Das was the person who paved a new way for journalism in Assam. He was the one who transformed journalism into activism. The firebrand journalist cum activist exposed the corruption of the government and gross human rights violations in the name of anti-insurgency operations. Therefore, there were many heinous efforts to silence this courageous voice. On May 17, 1996, Parag Das, then Executive Editor of the assamese daily Asomiya Pratidin’ was killed in broad daylight in Guwahati while he was heading towards his residence with his his son. Unfortunately, after more than two decades of his murder, the family of Das is yet to get justice.

He lived only for 35 years, but within such a short span of life he became a genuine voice of the people. He had ordinary life style, but his journey was truly extraordinary. Being a brilliant student throughout his academic career, Parag Das could have lived a lavish life doing some white collar jobs. But such a flamboyant life never attracted him.  He ranked 4th position both in Matriculation  and Pre-University (science) exams. Das did his graduation from ST. Stephen’s College and Post-graduate from Delhi School of Economics. He left the job of General Manager at Guwahati Stock Exchange to become the Executive Editor of ‘Asomiya Pratidin’.

Parag Kumar Das was a regular columnist for The Sentinel, an English daily. He was the Editor of ‘Budhbar’, a weekly which began its publication in March, 1989. After the closure of Budhbar, he brought out another magazine named ‘Aagan’ in 1994.  Both in  Budhbar and Aagan he highlighted the cases of human rights violation by the security forces. He exposed the nexus between the government and surrendered militants in carrying out these sinister activities. Journalist Das reported extensively on the incidents of rape by the Indian Army. Das criticised the Indian state’s claim over the resources of Assam.  On the other hand, he was critical of the ULFA too. Journalist Das vehemently criticised the misdeeds of the outfit and the aberration of their struggle.

Because of his strong criticism of the Indian state and uncompromising attitude, Parag Das had to encounter different kinds of harassment.  He was arrested under National Security Act and TADA Act in 1992 and 1993 respectively. On the other hand, his book titled ‘Swadhinotar Prastab’ was banned by the government.  But such supressive measures couldn’t stop his pen. Consequently, journalist Das had to sacrifice his own life. He was brutally killed in the heart of the city for his honesty and integrity. But Parag Kumar Das will  always be remembered for his journalism of courage and sacrifices he made for it.

Where can I get the following

26 Jan 2008 - 8:39am | Nava Thakuria
In an open defiance of militant diktat, Guwahatians celebrated India's 59th Republic Day with great enthusiasm. Residents in various localities hoisted the National Flag in a dauntless display of...

9 Aug 2007 - 1:11pm | editor
Guwahati : Kidnapped Tea garden executive Anirudhdha Tanti was released today near Odalguri in BTAD at about 12.30 PM. He was kidnapped on 31st July from Hirajuli Tea Garden when he was on the way to... 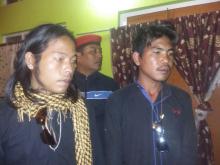 2 Dec 2017 - 10:12am | Mithun Baruah
MARGHERITA: Security forces apprehended two Naga rebels during a stepped up counter insurgency operation in Ledo on Saturday three days after a gang of rebels unleashed a reign of terror inside a...
Follow @Assam Times