At least three pilgrims from Assam died of heatwave inside the train on their way to the northern region. Many others in the train are falling sick.

The passengers and pilgrims in the train which departed Guwahati on May 11 the authority has not provided them with minimum facility.

“Even a drop of potable water is available inside the train. Despite repeated request, the authority has not blinked,” said a passenger.

He said,”even the electricity fans are pathetic. The fans, mostly, do not function properly big to speak of the medical facility.”

Named as Aastha, the newly introduced train for the pilgrims left for the northern region on May 11 from Guwahati. 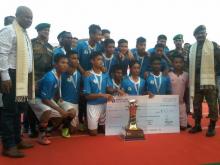 8 Oct 2008 - 12:55am | editor
"It is not about money. No amount of money will give back my limb" said a 65 years old woman with diabetes (name withheld on request) who underwent limb amputation at the Gandhi Memorial...