The continuous effort of the Army to serve the people living in remote villages near India-Bhutan border areas has recently been reflected with the arrangement of a medical camp at Garuajhar,Nonaipara in Udalguri district on June 22.Army camp Borongajuli of Red Horns Division under Gajraj Corps conducted the medical camp at Garuajhar village.Kamali Basumatari,MLA,Paneri constituency formally inaugurated the camp in presence of Commanding Officer of 14 Dogra Regiment and other distinguished people.Five Army medical officers including a dental surgeon  from Red Horns Division;three specialist doctors including a pediatrician,a gynochologist and an ENT specialist from government Civil Hospital provided medical assistance to the village people.Free medical check up and distribution of free medicine were also carried out for 1100 people.The medical camp was cheered by a cultural programme bringing joy to the people present.The Army band also performed with great enthusiasm to lift the spirit of the people.

22 May 2009 - 9:01am | editor
After moments of hectic lobbying in Delhi former minister for chemical and fertilizer and Jorhat MP Bijoy Krishna Handique was inducted in the new Manmohan Singh cabinet on Friday. .According to...

6 Aug 2011 - 2:39am | AT News
Bangladesh steps up procedures to deport ULFA general secretary Anup Chetia next week. But the authorities are tightlipped on the date. Security has been beefed up at the Rajshahi central jail have... 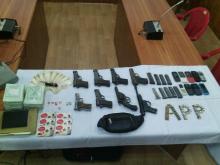 8 Oct 2015 - 4:33pm | Jackson Tayeng
The Arunachal Pradesh police claimed to have caught ten dreaded criminals during an operation in Itanagar on Thursday. Acting on tip off recently the capital city police arrested these notorious...