The Peace Now & Forever Campaign is conceived with the objective of addressing the deteriorating relations between Pakistan and India by the day and to provide platforms to enable common people and civil society to demand peace and condemn attempts at war mongering without feeling apologetic or guilty about their stand.

Networks and Organisations in 22 of the 29 States of India and the four Provinces of Pakistan are coming forward to Partner with the Peace Now Campaign. Simultaneous Launches are being planned on 1st July from 3 pm India Time and 2.30 pm Pakistan Time. We expect the Peace Now Campaign to be undertaken in around 250 cities, towns and villages in Pakistan, India and other countries and the Campaign will conclude with a Joint Celebration on 14-15 August 2017.

Apart from a Joint Signature Campaign, many other simultaneous programs in different cities and towns are being planned during the Campaign period and especially on seven weekends that will be available during the course of the Campaign like Lectures on Peace including need for cordial Pakistan India Relations in Schools, colleges and universities, Young Art for Future of Humanity: through Platform for Children and Youth - Film and Documentary Festivals, Culture Camps, Interfaith Prayer Meets, Peace Caravans, Rallies and Marathons, Outreach to Political Parties and Elected Representatives etc.

In Guwahati, India, the Campaign is launched at Dispur Press Club on 1st July 2017 at 3 pm.  The Peace Now Campaign in Guwahati is being organized by North East Youth Foundation and Youth for Humanity. Young people mostly students and youths apart from others took part in the signature campaign and appealed to both the countries for healthy talks and brining solution and making a good relation amongst both the countries. Organisers mentioned that more and people should be allowed to travel and visa formalities should be made easy for both the countries. People to people talk and interaction amongst them and involvement of civil society shall certainly contribute towards the healthy relationship in South Asia.

Many more cities and towns in Pakistan, India and other countries are expected to join the Campaign in the coming days. The Campaign will conclude with a Festival of the Sub Continent for Union of Hearts across different cities and towns on 14-15 August 2017.

15 Mar 2018 - 10:16am | AT News
HAILAKANDI: Unidentified miscreants gangraped and killed a Reang girl inside her house in Hailakandi sending huge wave cinemas of shock and anger across the state on Thursday. The incident of double... 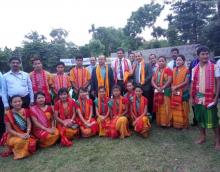 2 Jul 2018 - 11:12am | Shajid Khan
UDALGURI: In a good will initiative of Life Insurance Corporation of India (LICI) the Udalguri district figured among the list of seven districts  of state as Aspiration districts by the...

20 Jul 2019 - 8:47am | Robertson Tanti
Men-elephant conflict refuses to die down in Indo-Bhutan border of Udalguri. After a brief lull, two women lost their lives in two different incidents of attack on men on Friday. The first...