Education is the key to social,moral and cultural upliftment of the mankind. Without formal education nothing can be achieved. This was the observation by Hemanta Rabha, Associate Professor of Dept. of Political Science,Tangla College at a special felicitation to two meritorious students at the conference hall of Tangla College on Saturday. The programme which was organized by Mandasini Bainung Bwisuwa Derhasang co-ordinated by Sadou Rabha Sristi Sanmilani Udalguri district committee feted Somiran Rabha and Binoy Rabha who passed out HSLC and HS 2017 with flying colors. Noted social workers Sarat Rabha and Darpan Rabha also extended a one time financial aid of ten thousand to each of them. 12 Rabha cultural troupes were also extended with 'Kham' (traditional dhols of Rabhas) by Rabha Sristi Sanmilani.

3 Nov 2012 - 4:40am | editor
Good news for Assam cricketers. Captain Dheeraj Jadhav led from the front with an unbeaten ton taking the host to 220 for five at stumps on the opening day of the Ranji Trophy Group C match against... 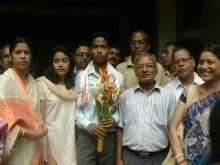 24 May 2011 - 2:35am | A Chakraborty
On 23rd May, 2011 Assam Higher Secondary Education Council (AHSEC) published this year's result of the H.S. final examination for all the streams-Arts, Science and Commerce. Shah Ekramul Alom, a...