Bee keeping is going to be s household practice in Assam to tap the potential available in the state. This was what a simple message spreading across the state on the World Honey Bee Day.

The message emerged from an awareness meeting organised by the ' Rural Development Society ( RDS ) at Panjabari on Friday.

Participating in the programme assistant director of agriculture Mowsam Hazarika said that, beekeeping has been useful in pollination of crops which can provide thr farming fraternity an extra source of good income.

Bee keeping, if properly, alone will fetch huge and sustainable income for a family.

Hazarika outlined several benefits of honey such as- honey is an good Antioxidant which helps heart patients remain trouble.

Noted educationist Dr Pabitra Pran Barua chaired the meeting where a demonstration on honey box preparation was also conducted in the programme by Thomas Rongpie.

ULFA-I owns up attack on army

25 Jan 2018 - 8:38am | AT News
GUWAHATI: The United Liberation Front of Asom(I) has owned up the responsibilities of the attack on army in Namsai where a jawan was killed on Wednesday. In a statement, the rebel outfit's military...

The 21st State conference of CPI at Morigaon today

10 Feb 2012 - 5:56pm | editor
The 21st state conference of Communist Party of India is begun at Morigaon today. According to Mr. Prasanna Deka, the leader of the party to overthrow the anti-people policy of Congress and communal... 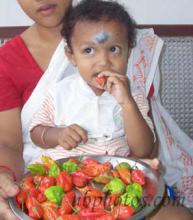 11 Jul 2007 - 12:33pm | editor
A 17-month-old toddler in Assam happily devours the locally available scorching Bhut Jolokia, recognized by the Guinness World Records as the hottest chilli on earth. The parents of Jayanta Lahan of...