The bomb was kept on a bicycle which was kept in front of a shop near the ASTC counter.Two people died on the spot and eight sustained serious injuries. Out of these, three people sucummbed to their injuries at the Kokrajhar hospital. The deceased has been identified as Munna Shah (18), Abdul Mazid (22), Munmun Sheikh (4), Mangal Sheikh (18). The ASTC counter has also been badly damaged in the blast.The other people who have been injured in the hospital have been shifted to the Gossaigaon civil hospital and the Kokrajhar RNB Civil Hospital.

The police suspected that the blast is the handiwork of ULFA and KLO . Police authorities were taking stock of the situation and investigations are on. 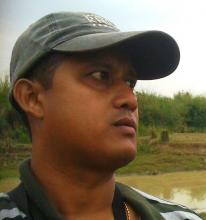 11 Oct 2012 - 4:28am | editor
Secretary of the Green Guard Nature Organization, Rituraj Phukan is all set for the International Antarctic Expedition. Scheduled for the 28th of February 2013, the 14 day expedition will be lead...

19 Sep 2016 - 5:36pm | AT News
Two persons died and several others sustained injury when police opened fire at a group of people who opposed the eviction drive on Monday without any compensation.