Muslims around Tangla town celebrated Eid-ul-Zuha -the festival of sacrifice with religious fervour and enthusiasm on Saturday, with people praying for peace, prosperity and amity. Hundreds  of Muslim men thronged Idgah maidan  in traditional attire and white caps and offered prayers on the occasion.In Tangla the people thronged Bara Masjid Idgah maidan and Banseria Idgah maidan  for special Eid prayers.

Eid-ul-Zuha, also called Id-al-Adha or the "Sacrifice Feast," is the second of two Muslim holidays celebrated worldwide each year and is considered the holier of the two. It honors the willingness of Ibrahim (Abraham) to sacrifice his son, as an act of obedience to God's command. On the occasion, members of the Muslim community also distributed gifts among economically less privileged sections. A festive atmosphere prevailed at various localities as men and children  drapped in traditional attires came out in streets.

Religious sermons were also delivered on the occasion  for peace and harmony.

While Maulana Mohammed Samaun Ahmed Noori led the prayers at  Bara Masjid Idgah Maidan while Maulana Rezakul Islam, led the prayers held in Banseria Eidgah Maidan .Sweets were also exchanged as both Muslims and Hindus greeted each other and feasted after the Eid prayers. Eid prayers were held with at various neighbouring places including Bamunjuli,Garuajhar,Panery,Dimakuchi and Kalaigaon.

22 Mar 2014 - 12:44pm | AT News
An uneasy situation prevailed in Jorhat during a Congress poll rally on Saturday.Local residents in large number assaulted a traffic policeman after a road mishap near the Bhugdoi bridge at a stone’s...

23 May 2013 - 6:54pm | AT News
Chief Minister Tarun Gogoi will conduct the formal dedication ceremony of India’s first Hospital Ship, an initiative of the Centre for North East Studies and Policy Research and the North Eastern... 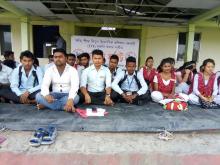