Conservation compromised for tourism in Kaziranga

Forest guards shot dead a charging adult male rhino in the Agaratoli Range of Kaziranga National Park on September 20. Earlier this year on February 14, a forest guard Gautam Barua, had to meet a terrible fate when he was on duty in the Bagori range of the National Park. He was killed by a charging rhino. In other words, the protector became the victim. Another guard, Podu Rajbongshi survived a similar attack in the Rajiv Gandhi Orang National Park in the last week of January. The year 2016 also saw similar incidents. Francis Horo, working with the forest department, died in an attack by wild buffalo on January 16 in the Bagori range of Kaziranga National Park while Sariful Islam, a forest guard in Orang, met his fate when a charging rhino attacked him. The string of incidents is a grim pointer to the behavioral changes in animals reflected on attacks on tourists, even forest guards, by charging rhinos, jumbos and wild buffaloes. While this calls for an in-depth behavioral study of the animals, the general assumption is that these animals--even in protected territories--are irked at the slightest provocation owing to a huge level of stress they undergo due to overwhelming changes in their habitat. A defender or an offender—in the eyes of the animal anyone in its territory--is an intruder!

Events of regular flood, destruction in habitat, barriers on migrating routes, shortage of food and water, intervention and intrusion in defended territories during breeding are not uncommon even in the protected areas and leads to overstress in animals. Although protected areas aim to provide resilience and stability in ecosystems besides other natural services, increasing tourist activities could impact wildlife in these protected areas.

Conservationists are of the opinion that ‘wildlife tourism can jeopardize the integrity of ecosystems in general and wildlife population dynamics in particular’. In India, even though we have a strict wildlife protection law, our tourism policies at the state level sometimes fail to adhere to the guiding principles. Our (wildlife) tourism policy unfortunately is aimed basically at revenue generation and ignores important factors like the ecological sensitivity of wildlife habitats, seasonal vulnerability of wildlife (breeding, nesting, rearing, nursing etc.), an animal’s individual characteristics and also it’s adaptability to human-induced disturbances. It needs to be remembered that only an exclusive four per cent of India’s landmass has been set aside as “protected areas” and the basic purpose of this has been conservation, not tourism promotion.

Over the years, conservation seems to have lost its priority owing to an increasing pressure for revenue generation. The Assam government’s decision to open important wildlife areas for tourists from the first week of October has drawn flak even from ex- forest officials. “Instead of regulating heavy flow of tourists inside the core areas of national parks, the Assam government went on to increase the number of months for the tourist season for more footfalls,” said a former forest official on condition of anonymity.

“Assam receives rainfall till October.With climate change, rainfall pattern has become erratic and we now have a longer rainy season. October is still wet and cloudy and hence not suitable for advent in wildlife areas. The government’s decision to open Kaziranga and Pobitora for tourists from October would not only affect conservation but would fall heavy on the purses of tourists who would pay in full but could avail limited access inside the Park or Sanctuary,” said Chandan Kumar Duarah, a science and environment journalist. Further he added that “Government should not earn money at the cost of conservation.”

“Post flood, the scenario is still difficult inside the wildlife areas. Tourists would not be able to see much in this time of the year. Elephant safari means not only the bulls but female elephants with babies and it is hard for the elephants to venture into those swampy tracts inside Kaziranga when the rain is still petering,” said Mohan Chandra Malakar, a former Chief Wildlife Warden of Assam.

“Repair works of roads and bridges inside Kaziranga National Park has not been completed and so tourists could avail limited access in only two ranges of the Park,” said a Park official.

World Heritage Sites-- Kaziranga and Manas National Park, Dibru-Saikhowa National Park, , Nameri National Park, Pobitora Wildlife Sanctuary and Laokhowa Wildlife Sanctuary in Assam were ravaged by the recent waves of flood. Kaziranga is said to be the jewel in the crown of Assam’s green assets. However, the current wave of floods has worked as an eye-opener that brings out the real picture of the conservation status inside the park. According to the State Forest Department, about 350 animals, including 26 one-horned rhinos, five elephants, a tiger and more than 250 deer died in the Kaziranga National Park and Tiger Reserve during the recent floods but local NGOs claim more than a thousand animals perished in the two waves of floods, especially the second wave that surpassed the record of 1998. The government list has not taken into account lesser wildlife like wild boars, porcupines, hog badgers, foxes or even gaurs (Indian bison) and wild buffaloes. More carcasses were found floating once water levels receded while rescued rhino and jumbo orphans were sent to the rehabilitation centre. Absence of infrastructure facilities and insufficient manpower brought doom for a sizable wildlife population.  The second wave of flood devastated the Pobitora Wildlife Sanctuary, known for the highest density of one-horned rhinos in the world. 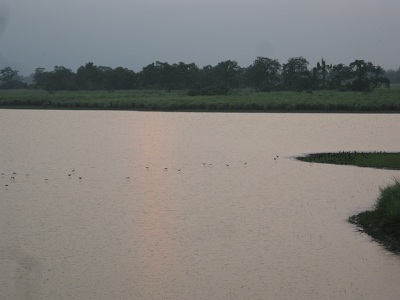 Like many other protected areas of the country, the important wildlife habitats of Assam that include the two World Heritage Sites--Kaziranga and Manas National Park--are under pressure from an ever increasing flow of tourists round the year. Projected as a “tourist destination” by the State Forest Department, hospitality measures found topmost priority inside the boundaries of the national parks, while other infrastructure development essential for conservation were sidelined. Unchecked growth of the hospitality industry in close confines of the sanctuaries is destroying the once placid pristine ambience of the prime wildlife habitats. Succumbing to the pressure of the hospitality industry the Assam Forest Minister has given permission for a longer ‘tourist season’ of eight months starting from October.

“It may seem strange that the task of wildlife preservation is entrusted to the Forest Departments in India, and there are no separate wildlife departments. When this problem came up in 1952 it was decided to entrust this work to the Forest Departments of the various states because nearly all the wildlife and sanctuaries of the country happen to be in the forests and other lands which are under the jurisdiction of the Forest Departments. To create another department to preserve wildlife would lead to overlapping and unnecessary duplicating of work, and in any case it would be difficult to find the trained personnel for another department.
So the officers and Subordinate Staff of the Forest Departments in India are entrusted with the task of preserving the fauna as well as the forests, and for this purpose there are wildlife Divisions and special personnel within the forest departments, under the Chief Conservator of Forests, to deal with wildlife matters. Any description of India’s wildlife and wild areas will inevitably reveal many shortcomings of the Forest Personnel concerned, as many have been observed by readers of this book. At this juncture, therefore. I feel impelled to take the opportunity of paying my humble tribute to those members of the Forest Departments, both officers and Subordinate Staff, who, like R C Das of Kaziranga, have dedicated themselves to the cause of preservation, in face of many difficulties – including dangerous poachers, trigger-happy “sportsmen” and unenlightened public opinion.”--- wrote E P Gee, one of the best known authorities in India on wildlife, half a century ago in his famous book The Wildlife of India.

Concerns do remain over the shortcomings of the department entrusted with the conservation of flora and fauna. While it was expected of the department to weigh Kaziranga more as a protected area rather than a tourist destination while considering actions that impacts wildlife conservation, the Forest Minister’s announcement last year to open the Kaziranga National Park and the Pobitora Wildlife Sanctuary ahead of the normal tourist season has come as a shocker for nature lovers and conservationists who on earlier occasions advised the government to frame more effective policies for employment of local youths. By succumbing to the demand of the Jeep Safari Association for a longer season the department proved once again its inefficiency to deal with core issues of the National Park.

20 Jan 2019 - 8:30am | AT Kokrajhar Bureau
The All Adivasi Students Association of Assam (AASAA) Stephen Lakra faction has demanded earlu granting of ST status and ST-A (Aboriginal) status to the Adivasis. AASAA has alleged that BJP has...

10 May 2015 - 5:11pm | AT News
One after another Union ministers are visiting the state at a time when BJP and Congress are equally feeling the heat of the Indo-Bangla land deal. Boxed by the circumstances, the BJP leadership are...