Baksa district beat Chirang district 2-0 goals to lift the trophy in the final match of the BTC -Army goodwill football premier league-2017 being held at SAI centre in Kokrajhar on Saturday.

For Baksa, Golap Basumatary netted first goal in the initial 2nd minutes of the match against Chirang and led the match 1-0 in the first half. Again, Sanjib Deka of Baksa netted another goal in 80th minutes against Chirang which led the team to defeat 2-0 goals and lifted the trophy. 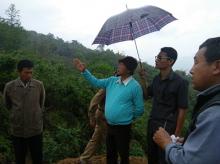 25 Feb 2018 - 10:34am | AT News
TURA: Security forces in and around Adangpak village in the East Garo Hills of Meghalaya are continuing the massive operation in search of another dreaded north eastern rebel leader a day after they...