The mysterious death of an elephant calf casts no less spell of shadow in Udalguri on Monday. According to Ranjit Tanti, a wildlife activist, the calf, aged around 8, was found dead at a paddy field in Jorpukhuri village under Nonai forest range.

A team of forest officials rushed to the spot after some villagers informed them about the dead calf and postmortem of the carcass was on the spot and buried. The exact cause of the pachyderm's death is yet to be ascertained. The forest official Kushal Deka said, adding that no injury mark was found on the carcass during preliminary examinations.

The forest official did not find any electric wires, generally put up by local farmers around their croplands to prevent wild elephants from destroying their crops.

This is the third incident of elephant death since October 2017 in Udalguri district, Ranjit Tanti said.

In the past few months, there have been a number of human-elephant conflicts in the Indo-Bhutan border areas of Udalguri district comprising Hattigarh, Borengajuli, Budlapara, Majuli, Bhooteachang tea estates.

The region has witnessed several killings of tribals as well as elephants and widespread damage to house and crops by rogue pachyderms in the past years. 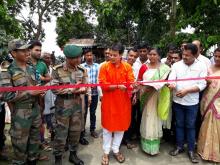 20 Jun 2017 - 12:14pm | AT Staff Reporter
In a series of medical camps conducted by Indian Army under operation Sadbhavna, Army camp Deomornoi of 14 Dogra Regiment of Red Horns Division under Gajraj Corps conducted a medical camp for the...

Awareness Programme on Agrometeorology at Nagaon