Assam has witnessed continuous violence and unrest throughout the last few decades, but the recent ethnic clashes in some of its districts have been significant and proved to be very disturbing from the point of view of harmony and development of the state. The Government’s failure in curbing the flood of Bangladeshi immigration has given rise to contempt and fury of the indigenous people whose identity has been captured and threatened by the immigrants. The recent ethnic unrest and violence that spread in various parts of Udalguri and Darrang (Partly Sonitpur) district was the result of outburst of the same.
While tension still prevails in the trouble-torn areas, the death-toll has gone up to 55 according to Government sources, although in reality it may be far more as claimed by local people and eye-witnesses. However, the police have not ruled out the possibility of recovery of more bodies from the remote areas. Hundreds of people were injured and have been going under treatment in various hospitals at Udalguri, Mangaldoi, Tezpur and Guwahati. What is more striking is that more than 86,071 people have been left homeless by the week-long group clashes. According to Assam Police, 54,000 people are taking shelter in relief camps in Udalguri and 32,071 in Darrang district till now.

To what extent this barbarous act reached and the fire of hatred spread between the indigenous Bodo people and the minorities (who were believed to be Bangladeshi immigrants), can be understood by the incident of killing of even a pregnant woman by miscreants at Mojabari under Sidli police station in Chirang districts on 6th of October, 2008, the fourth day of these clashes. Moreover, incidents of brutal killing of young people and thrown away of the bodies into the rivers, were also happened in some parts of the districts.

Meanwhile, the political parties are playing blame-game and trying to attain political mileage from the incidents. Some sections are instigating secretly and trying to give it a communal colour. The BJP flays the Congress led Government in the state of playing double standards and demands imposition of President’s rule in the state in the aftermath of the clashes. The comment of veteran BJP leader and the leader of Opposition in the Lok Sabha, L. K. Advani at a Vijay Sankalpa rally in New Delhi is significant, when he says that Delhi could not belong to Bangladeshi infiltrators. “They have to go. Just as Bangladeshi infiltrators from other parts of India, especially in Assam, have to go”, Advani said. Advani questioned the Assam government that how Bangladeshi settlers have been able to make their way in to Bodo inhabited areas in such large numbers and why the state Government is turning a blind eye. Meanwhile, another BJP leader Venkahiah Naidu says that communal attacks by Bangladeshi infiltrators on minority Bodo Hindus, is matter of grave concern for the country.

It is worth mentioning that the ethnic violence was erupted first in the BTAD area in the month of August and allegation of not taking appropriate and timely security measures to tackle the problem is in the air against the Congress Government in the state. Although the Assam government has accused the National Democratic Front of Bodoland of fomenting trouble and violence in the districts, the outfit, which was in a ceasefire with the Government, reacted strongly against these allegations and counter-attacked the Government for its failure in providing safety and security to the indigenous people of the state. Mr. Gobinda Basumatary, general secretary of the outfit has asked Chief Minister Tarun Gogoi to visit the trouble-torn areas for the “real truth”, instead of blaming it. He categorically challenges Mr. Gogoi to visit the areas and talk to the Bodos, Bengalis, Nepalese, Assamese and Adivasis who are languishing in relief camps to find out the real truth. “It is not a clash between Bodos and non-Bodos as is alleged. It is the real sons of the land, who are suffering in their homeland”, Basumatary says. He alleges that the indigenous people have been displaced by the infiltrators and the Government of Assam is solely responsible for the situation.Of late, The Chief Minister Tarun Gogoi has visited the strife-torn areas of Udalguri and Darrang and ordered strict vigil by the security forces in the region. He maintained that in no case the the security and integrity of common people will be compromised.

Another significant development is that the All Assam Students’ Union and the All Bodo Students’ Union terming the acts of violence as the evil-designs of Bangladeshi immigrants backed by fundamentalists and anti-India groups. The leaders of the two organizations complained to the Governor of the state, Mr. S.C. Mathur that until and unless the Government of Assam abandons its pro-Bangladeshi policies, the volatile situation of the state would not improve. It is alleged that the some fundamentalist groups had hoisted the Pakistani flags in several parts of the two trouble-torn districts, but the state government took no action against the miscreants. On the contrary, the minority students union’s claim that the violence was the result of AASU’s anti-Bangladeshi drive in the state is reflecting the stand of the local Muslims in the state.

In this context, it is clear that the Bangladeshi immigration is the root cause of the present volatile situation in the state. As is alleged, if the political parties are backing the immigrants for the sake of their votes, the very existence of the indigenous people will be in threat and the state will face the turmoil again and again. The outgoing Director General of BSF, Mr. A.K.Mitra has recently said in a number of occasions that a total of 12 lakh Bangladeshi nationals have entered India through West Bengal corridor through valid pass-ports from the period of post-independence up to the year 2005. Mr. Mitra clarified that till today; there was no record of returning of the Bangladeshi nationals to their country. He categorically maintained that those people were missing in India since then. This proves to be a vital comment made by a top-ranked official of one of the major security forces of the country. In fact, it is a paradox of the whole situation. 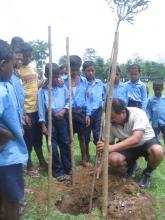 12 Jun 2011 - 9:35pm | editor
The management of Romai Tea Estate, Dibrugarh observed World Environment Day on June 5, 6 at estate's primary school premises. A meeting was held to create environment awareness among the people as...

25 May 2012 - 12:02am | editor
Assam and Meghalaya are all set to hold a high level meeting on Thursday to defuse the simmering tension in Langpih. The meeting is slated to be held in the chief secretary level in Guwahati to...

AIDS and its socio-economic impact

16 Jul 2008 - 9:50pm | DigantaTalukdar
Acquired Immune Deficiency Syndrome (AIDS or Aids) is a collection of symptoms and infections in humans resulting from the specific damage to the immune system caused by the human immunodeficiency...