Gangrape and murder rerun in Nagaon

NAGAON: In yet another bizarre incident, miscreants burnt alive a minor girl after being gangraped in Nagaon district sending huge shock and anger across the state on Friday.

The gruesome incident took place in Bordua where the miscreants in Dhaniabheti gaon gangraped the minor girl inside her home in the absence of her parents and later set her on fire by pouring kerosene and fled.

Later local residents came to her rescue and rushed her to the hospital where she was declared brought dead.

The police have caught the entire gang including the main accused Zakir Hussain by the evening.
Many organizations and individuals have  demanded capital punishment of the perpetrators.

6 Jun 2011 - 10:28pm | editor
Unusual celebration of World Environment Day by villagers and students near Indo-Bhutan international border at Swapangaon near Bhairabkunda on June 5 has been appreciated by nature lovers.Far... 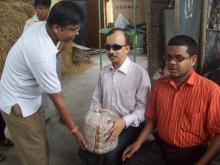 Mushroom Cultivation brings a new hope for the blind

23 Jul 2011 - 8:01am | editor
One day training was held on mushroom production technologies for blind and farmers’ master trainer on 21st of July 2011 Thursday at The Supervisors Training Center at Directorate of...

26 Mar 2010 - 11:26pm | editor
Amid a high voltage drama and allegations of horse trading the ruling Congress has retained both the Rajya Sabha seats from Assam after the end of the polling on Friday. It’s a smooth sailing...