Send the rapists to the gallows

NAGAON: People thronged in thousands at Nehrubali in Nagaon town demanding Justice for the minor girl in Dhing whom three miscreants gangraped and burnt alive two days back.

The entire gathering demanded immediate arrest of the main culprit Zakir Hussain, who is still on the run while two other arrested perpetrators are juvenile.

Speakers after speakers in the crowd demanded capital punishment for the perpetrators saying that this measure is the only way to firmly deal with these raising cases of rape and murder.

On the other hand, Batadrawa MLA Angorlota Deka visited the.victom’s family members on Sunday and assured them of Justice. 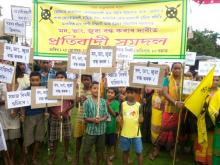 Woes of waters for wild animals

29 Jul 2016 - 2:50pm | AT News
Flood waters have been wreaking no less havoc for the birds and animals in national parks and sanctuaries. Rhinos along with wild animals have shifted to the near by hill in the Kaziranga National...

3 Feb 2011 - 4:59pm | editor
The United Liberation Front of Asom is set to make a formal announcement on Saturday on its peace initiative with the government. According to sources available with www.assamtimes, the announcements...