GUWAHATI:            The State’s leading music institute Piano Kids celebrated its sixth anniversary with an evening of exhilarating piano music performed by a group of talented youngsters in chic costumes at the Pragjyoti Cultural Complex, Machkhowa, Guwahati, on April 6. The combined musical energy of these kids truly lived up to the expectations and interests among music aficionados. The musical programme, designed and directed by renowned piano maestro Kushal Krishna Dev Goswami, was titled ‘Night Of The Little Pianists 2018’.
After a welcome speech by Dr Pradip Mahanta, the president of the working committee, the evening kicked off with the devotional tune – ‘Muktito nispriha jitu’, composed by Srimanta Sankardeva and Madhabdev, rendered and set to music by the students of the institute. As has been a tradition, Piano Kids showcased music that encompassed several genres, and the students with their sustained and focused learning, played them with admirable ease, making the evening a feast for music lovers and enthusiasts.
The institute continues to nurture and develop Assamese classics with timeless western and contemporary compositions in all its varied forms. Apart from integrating western compositions, ballads and folk music from all over the world, reflecting a wide variety of musical influences, Kushal Krishna Dev Goswami has been assiduously working towards preserving, promoting and revitalising Assamese traditional songs, including the Borgeets, the tunes of the Kirtan Ghosha and Naamghosha, Oja Pali, Zikir and Jaris, by converting them into the staff notation. It has been central to his pioneering and acclaimed work in piano music, and which in turn, has provided a wonderful structure for the young and upcoming pianists to not only just learn and practice, but broaden their horizons, in a collective musical environment. “It has always been my vision to incorporate many of our traditional folk songs to the staff notation”, said Dev Goswami, after being felicitated by the organising committee, comprising mostly of guardians of the students. He also felt that these traditional Assamese songs needed to be disseminated elsewhere in the country and even abroad. It has been a challenge for him shepherding a whole bunch of youngsters, who went through rigorous hours of training in preparation for the big occasion.
The evening proceeded with the students displaying their prowess and energy in a number of musical numbers comprising of the familiar lullaby ‘Aamaare moina xubo ye..’, ‘We shall overcome’, which was once a key anthem of the African American civil rights movement in the Fifties and Sixties, legendary artiste Dr Bhupen Hazarika’s immortal ‘Bistirno paarore..’, Kalaguru Bishnuprasad Rabha’s ‘Naahor phule nuxuwaai..’, Australian composer Katherine Faith’s ‘Swans on the Lake’, French musician George Biscof’s ‘Morning greetings’, ‘Maa aami Sadiyale jaamei’ – an evergreen number written by lyricist Keshav Mahanta and rendered by Khagen Mahanta, Kishore Kumar’s popular Hindi song ‘Ahh Chal Ke Tuje..’ from the film ‘Door Gagan Ki Chaon Main’, Jayanta Hazarika’s evergreen song ‘Mayamoi rupali jonak..’, and finally, what was certainly the highlight of the evening, a Bihu performance played on a track, which had been converted to staff notation for the first time by Goswami. Weaving a tapestry around Assamese, Boro, Seraa, Mishing and Tiwa Bihu, the group players engaged the audience with their dexterous movements, playing in perfect harmony. Goswami selected the track after going through a lot of research work, listening and collecting traditional tunes and cataloguing them before laying out the notations. It has certainly left everyone in the audiences with a greater sense of appreciation for the enormous amount of work and creativity that the maestro has endeavoured to accomplish.
The evening also witnessed the felicitation of renowned music director of Assamese cinema Ramen Baruah, who graced the occasion as the chief guest. “The group playing is beautifully synchronised and disciplined, and the credit goes to Goswami for instilling such confidence in his students,” said Baruah. The organisers also felicitated Pronoy Bordoloi, executive editor, Prag News and Gita Dutta, Principal of Shrimanta Shankar Academy. The programme was nicely compered by Roonjyoti Hazarika Bora and Papori Saikia Dowerah.

30 Jun 2011 - 9:36pm | Anup Biswas
Demanding immediate Bifurcation of North Cachar Hills district into two Autonomous Districts under 3(c) of Article 244(2) of the Sixth Schedule to the Constitution of India, the Indigenous Students...

All out protests against Rockybul Hussain 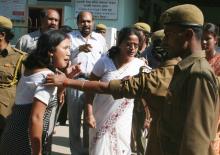 7 Nov 2008 - 2:07am | DigantaTalukdar
BJP activists blocked by the Police at Nagaon on Thursday as they were storming into the Deputy Commissioner's office, demanding the arrest of Rockybul Hussain at Nagaon.

28 Jul 2012 - 3:56am | editor
Prime Minister Manmohan Singh along with UPA chairperson Sonia Gandhi are all set to visit in Kokrajhar on Saturday. The duo are scheduled to arrived in the Lokpriya Gopinath Bordoloi International...
Follow @Assam Times