NAMRUP: Bihu festivity still grips Namrup as the industrial town is holding a three days festival amid much pomp and gaiety.

People thronged in thousands at the Namrup BVFCL Public Bihu Auditorium to get soaked in the festivity of the annual spring gala which got underway on Friday.

The  event started with  Tileswar Bora hosting the flag in presence of Ranjit Baruah to be followed by the tribute to Kamaleswar Gogoi. After that the inauguration of Central Bihu stage by  Bornamghar Husori Team with a spectacular performance .

Assamese teaching among the Assamese children in Mumbai 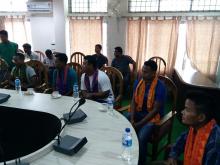 14 Aug 2017 - 11:12pm | AT Kokrajhar Bureau
Atleast nine members from Ranjan Daimary faction of NDFB have joined BPF on Monday. BPF president Hagrama Mohilary welcomed them at a function in Kokrajhar with a hope that it would help the...