Hojai:- In a bid to create awareness among the customer's  regarding Non Performing Assets (NPA's) United Bank Of India,Daboka branch organised a rally on Saturday at Daboka Town under Hojai District.The rally was lead by Chief Manager UBI, Regional office,Nagaon Mani Kumar Jha,and Manager UBI Daboka Branch Jalil Dewan,which was marched from Daboka UBI Branch to Daboka main market.All the members were holding placards,banners  that the read the message of loan recovery. Talking to media, Chief Manager along with Daboka Branch Manager  said," It is an initiative to raise general awareness about non-performing assets (NPAs) as the bank is struggling to recover loans.""If customers doesn't return the loan amount, many other customer are not able to avail this services."They added They appealed all the loan defaulters to "repay their loans and give others a chance (to borrow)”.Around hundreds of people joined in this awareness rally including bank staff, customer Service Centre employees and many emininent citizens of Daboka town.

10 Jul 2008 - 10:41pm | editor
The peace process in Assam is set to take a significant role as ULFA general secretary Anup Chetia is expected to play a vital role along with those in the ceasefire. According to the expelled top...

Conflict in BTAD, Issue of Influx and Land Alienation in Assam 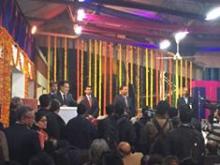 19 Dec 2014 - 11:51am | Rashmita Gogoi
A huge group of Delhi University students is on a visit to the north east to discover the region afresh.Union minister of state for home Kiren Rijiju flagged off the special train Gyanodoy at a brief...
Follow @Assam Times