Nagaon: A Guwahati based truck driver and his wife have been arrested for reporting a fake truck hijacking case at the Raha police station , police said here on Sunday. Lakshman Das , officer in-charge , Raha police station told media ANN service that a truck driver Pranjit Kalita on Tuesday morning complained to Raha P S that some miscreants after beating him severely hijacked the truck he was driving from Guwahati to Tinsukia at night in Dighaliati area under Raha P S. The truck was carrying 19.95 metric ton iron rods from Panikhaiti , Guwahati to Pawan Steel , Makum road , Tinsukia.

Initially police believed the driver's statement. Later when police started investigating the case , it came to light that the truck was not hijacked at Raha as alleged by the driver Pranjit Kalita. Police after interrogating Kalita came to know that the truck changed course from Guwahati and started heading Shillong ,Meghalaya instead of its actual destination Tinsukia and it was a conspiracy Kalita and his truck owner wife Mamoni Kalita planned. On reaching Shillong, Pranjit first sold the iron rods and then the truck.

Acting on the inputs , a team of Raha police led by OC Lakshman Das headed for Shillong on Friday to recover the truck and the iron rods. In Shillong police successfully nabbed a person identified as Dangeitlang Siang Shai of Pohktich , East Khasi Hills , in whose residence the iron rods were recovered. Although , police failed to find out the truck but search is on.

Pall of gloom in film world as star actor departs

22 Nov 2017 - 8:05pm | AT News
GUWAHATI:Biju Phukan is no more. The promising Assamese film personality breathed his last at a Guwahati based hospital suddenly at 6.15 in the evening leaving a pall of gloom across the state. Born... 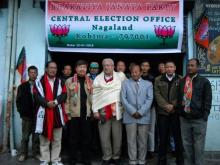 31 Jan 2018 - 9:01am | AT News
NEW DELHI: Caught in a barrage of criticism from the central leadership Nagaland state BJP has pulled out of the joint statement signed to boycott the upcoming assembly polls slated for February 27...