Amid the killer corona menace, the authorities have stepped up activities to firmly deal with illicit liquor racket.

A huge consignment of illicit liquor has been seized and destroyed by Police in Duhnoi on Monday. 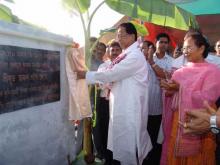 24 Sep 2010 - 3:46am | editor
AICC general secretary Rahul Gandhi on Thursday visited Dibrugarh university. But only to be received with black flags.As soon as the icon of the country's youth Congress landed at the varsity...