Raha: Went through great difficulties as there was no work, food or money during lockdown, a  group of 223 stranded persons including children , differntly able persons, returned to Nagaon in an Assam-bound special train from Coimbatore , Tamilnadu  on Sunday morning.

The group alighted at the Chaparmukh railway  junction at around 5.30 am from the Coimbatore -Dibrugarh  Special train. A sense of relief was writ large on the weary faces of the 223 persons who reached their home district after 55-days of lockdown. This was the first batch of stranded persons to return to Nagaon  in a train.

Out of the total 223 persons who got down from the train at Chaparmukh , 173 belonged to Nagaon, 25 to Hojai , 15 to Karbi Anglong , 8 to Morigaon and 2 belonged to West Karbi Anglong districts respectively. Apart from  a few students , patients , most of the returnees were  labourers engaged to different construction sites , factories in various corners of Coimbatore.

After the thermal screening , all the returnees were taken to their respective districts in buses which were parked near the railway  junction. A large number of officials, including the Nagaon SP Abhijit Gaurav Dilip , ASP Gunendra Deka , Nagaon ADC Lachit Kumar Das along with railway staff were present at the station to welcome the returnees. 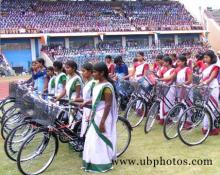 29 May 2008 - 4:52am | editor
School students seen with their respective bicycles as Chief Minister of Assam Tarun Gogoi distribute Free Bicycles to the Below Poverty Line (BPL) school students of class VIII and Class IX under...

23 Nov 2007 - 9:28am | pbaruah
The State Election Commission (SEC) is gearing up for holding a free and fair panchayat polls in the state as the Gauhati High Court has cleared the decks.According to information, the poll...

27 Mar 2015 - 11:39am | AT News
The process to update NRC is underway in Golaghat along with other districts from Friday.NRC officials are on door to door visit distributing forms to be supervised by another circle of officers.The...