Gogoi finally reacts to the foreigners issues, to form public committee as a watchdog against foreigners

Guwahati: All people forcefully chucked out from Nagaland and Arunachal Pradesh are Indian citizens according to the Assam Chief Minister Tarun Gogoi. " I want to make it very clear that government have verified their cases and it has been found that they are all India citizens"- He said in a press conference held at the Secretariat conference hall.

He also informed that Government would publish a list of names of those persons along with their address so that people can know whether they are Indian citizens or foreigners. He also reiterated that the Government will not allow making Assam a dumping ground of foreigners.

Government had also decided to constitute committees consisting of all political parties including AASU, AAMSU and other organizations at the circle level, sub-division level, district level and also state level in order to check and inform the authorities concerned about suspected foreigners for verification.

Referring to a recent spate of debate after All Assam Minority Students Union (AAMSU) vows to throw away all Assamese people living in Barpeta, Dhubri and Goalpara, if deportation of suspected nationals did not stop immediately in other parts of Assam he said,- "This is definitely a provocative statement. Such statements will create more misunderstanding and tension. We caution not to make any such provocative at the same time, I want to reiterate that Government will protect every genuine Indian citizen."

"No boy will be allowed to take the law and order in their hands to drive out any people, not to speak of Assamese people and all those who are Indian citizen will be fully protected"- he assured.

He also criticised several organization for their 'anti-foreigner movement'. Gogoi said, -"It is also not proper in the part of AASU, ABSU, AJYCP and Bharatiya Janata Yuva Morcha to dub all those expelled Indian citizens from Nagaland and Arunachal Pradesh as foreigners only because they belong to religious minority, labor community". 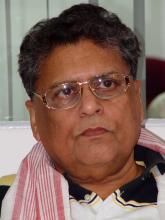 Is it correct to debar Satyam employess from employment

14 Jan 2009 - 8:24pm | gpnarua
Recently a few well known IT companies have decide not to hire present employees of Satyam. There are few thousand of fresh graduates who have been given appointment letters by Satyam but not yet...

26 May 2014 - 7:41am | AT News
Chief miniser Tarun Gogoi is scheduled to attend Narendra Modi’s swearing in ceremony in New Delhi on Monday.   Gogoi will be among several other top Congress leaders and chief minister...