Minoti and Sunita performed for a mega fundraising event at the hitoric Shanmughanada Auditorium in Mumbai recently.The concert was named "Privilege" in aid of the Don Bosco Shelter, Mumbai which takes care of hundreds of street children. Minoti and Sunita shared the stage with a host of other celebrities who performed that day starting from Latino drummer Bondo, to Manasi Scott, mona Singh and Oscar winning choreographer Longinus.The chief guest for the function was Boman Irani, chief patron of the don Bosco Shelter.

Father Barnabe head of the Shelter while thanking all the artists made a special mention of the efforts of Sunita and Minoti for contributing towards the event. Sunita has been associated with the don Bosco children as she conducts music workshops for them. 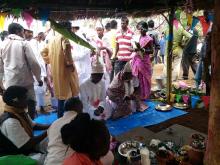 18 Aug 2017 - 12:22pm | AT News Guwahati
The Narangi based Luitpaar Club has organized a friendly women football match on Saturday (19 August 2017) in the city. The participating teams include the city based Handique Girls' College eleven...

3 Jun 2011 - 1:47am | editor
The Apollo Clinic, Guwahati in association with Guwahati Press Club has organised a general health check-up and awareness camp for scribes on June 4 (Saturday). The camp will start at 10 am in the...