A meeting was organized at the DC’s chamber in Udalguri district on May 2 at 12 noon to discuss measures to be taken against the dreadful swine flu.Although no cases of swine flu has been reported so far ( human and animal ) in Udalguri district,swine flu has emerged as a dreadful threat to human beings in Assam. The meeting was convened by the DVO, Udaalguri, in consultation with the DC UIdalguri. The meeting was presided over by P.K.Mahanta, ADC, Udalguri and attended by District Election Officer, Udalguri, SDO (S), Udalguiri; ADC, Bhergaon subdivision; Joint Director,Health, Udalguri;staff of district veterinary department and various NGOs. Explaining about the severity of the disease, Dr. Naram Kachari, DVO Udalguri said that though basically swine flu virus H1 N1 attacked the pigs, it undertook mutation within pigs and becomes highly pathogenic to human beings. According to him, once the virus attacks any human being,it becomes highly communicable to entire human population. Man to man transmission could take a pandemic form. Although no cases has so far been reported so far in Udalguri district,the existing ‘District Animal Disease Prevention & Control Committee’,headed by DC Udalguri as the chairman, DVO,Udalguri as member secretary and Joint Director Health; Superintendent of Police, Udalguri; DFO, Udalguri; Chairman Udalguri Town Committee; Executive Engineer, PHE;and local NGOs as membershas been fully prepared to combat any possible threat.Preventive measures including strict surveillance over pigs and pig products; restriction on the import of pigs and pig products from the neighboring states; engaging all the field level workers of the Veterinary department to report for any kind of diseases resembling flu in both human and pigs in the district.Arrangements have already made to distribute leaflets and pamphlets to create awareness among people of the district.People have also been advised not to be panicked over swine flu.

It has been known that the disease has been in level-5 worldwide,just one level below pandemic form as per WHO’s official report.The meeting was also addressed by the Joint Director,Health,Udalguri.He explained about the actions taken by the health department so as to prevent man to man transmission of swine flu.

16 May 2015 - 9:12am | AT News
Eminent Assamese singer Pulak Banerjee inaugurated the first copy of Evolution, an English monthly, at Guwahati Press Club on 15 May 2015. Banerjee was assisted by senior journalists Nava Thakuria,... 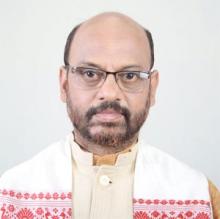 28 Jan 2017 - 10:56pm | AT News
BJP legislator from Jorhat Hitendra Nath Goswami will be the Assam Assembly Speaker replacing Ranjit Das, who has already taken over as state Party president.Goswami’s name was formally cleared at...