Indian Navy has launched a Publicity Drive in the North east to build up awareness amongst the students and youth about various career opportunities available in Navy. As a part of the Publicity Drive, an Awarenss Programme was held at Handique Girls' College which was jointly organised in collaboration with the Career Guidance and Placement Cell of Handique Girls' College and APPOCCUS (Association of Past and Present Office Bearers of Cotton College Union Society).
LieutenantCommander Saumar Jyoti Bhuyan who was deputed to the North east for co-ordinating the Publicity Drive explained in detail about the various oportunities that exists for entry into the Naval Force. He gave many valuable tips and suggestions for developing the necessary skill and knowledge base for successfull appearing in the recruitment drive conducted by Indian Navy. A large number of students including students from Cotton College took part in the Awareness Programme.

Nabajit Dutta, Convenor of the Career Guidance and Placement Cell of Handique Girls' College offered the vote of thanks and asked the students to circulate the information and knowledge acquired through the programme for the benifit of the youth of the region. Jagdish Dutta, General Secretary, APPOCCUS co-ordinated the programme. The awareness programme will be continued in several other places of the NE region.

25 Apr 2019 - 8:40pm | AT News
Guwahati: Finally state Congress has admitted the party's failure to make the Citizenship Bill in the Lok Sabha poll with full forces.  This was what former CM Tarun Gogoi said as he was... 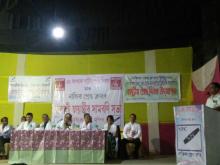