Gome Thapa a national Kunf-fu (GOUSHU) player and Chief Technical Director and General Secretary All Assam (Chinese Martial Arts) Kungfu Association represented India at the Hong Kong International Kung Fu festival’s “World GOUSHU (Chinese Martial Arts) Competition” and has been awarded as the “Outstanding Indian Trainer” a consolation recognition. He has been presented this award by the international federation in recognition to his noble deed of imparting kungfu training to youths and kids in India. It is the only recognition for Indian squad. The country and the state in particular the martial arts fraternity is satisfied over his performance at the international arena.

Permalink Submitted by kkpradhan on Tue, 11/08/2009 - 06:46
Congratulation ! Mr.Thapa, you have brought laurel not only to india but also to assam. Assam is proud of you. keep it up.

3 Apr 2013 - 10:42am | AT News
A truck driver was killed and five others have been injured when two trucks collided heads on in the out skirt of Guwahati on Wednesday. The mishap took place at Sarutezpur at around 7.30 where a... 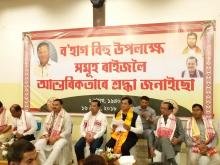 16 Oct 2014 - 7:43am | SK Hasan
Preparations are afoot for holding a state level convention in Nazira on ethnic identity of the Assamese. Film actor Dinesh will open the convention organized by the Pragatishil Jatiya Nagarik Mancha...