Heavy precipitation in the upper reaches of Subansiri River basin and Jiadhal river basin for the last 24 hours has triggered flood emergency in Dhemaji and Bordoloni Block of Dhemaji District. Jiadhal River Basin: Breached on the embankment on Jiadhal at Nepali Pathar and Adarsha Gaon point at the wee hours of 13th August 2009 has severely affected numbers of villages of Dhemaji Development block. The report received at 9.00 a.m. from the field reflects that the following Panchayats are severely affected- (1) Samarajan (2) Naruathan (3) Ghughuha (4) Ajuha (5) Batgharia. Report has received that the flood water has hit the Ghilamora Block of Lakhimpur District.

Na-Nadi River basin: Breached on the embankment on Na-Nadi River at Na-Nadi Bridge point (at 22.00 hours of 12.08.2009) has created havoc in numbers of villages of Bordoloni Block. According to the First hand report the Bhabeli Panchayat has been severely affected. Report has been received that the Bordoibam area under Ghilamora Block of Lakhimpur District is under great threat. Heavy flood water logging has been reported from Mingmang, Missamari, Ukhamati and Gogamukh Panchayats.

Large numbers of people are trapped in villages and finding it hurt to come out due to high current of the flood water. The NH 52 has been breached at 2 points.@ numbers of Bridges have been washed away. As heavy rainfall is still continuing there is every possibility of turning situation worst.

Permalink Submitted by Pallavi Barua on Thu, 13/08/2009 - 15:46
Floods are no longer natural disaster....in Assam, they have become man-made. Breach of dams, release of dam water by Bhutan have become a matter of serious concern. Strange, huge India has not warned its little neighbour as yet.

Guwahati to honour Don Bosco with a statue

26 Jul 2015 - 1:12pm | CM Paul
The month of August will see several celebrations in the city of Guwahati, the gateway of northeast India, to mark the conclusion of the bi-centenary of the birth of St John Bosco.The state of Assam... 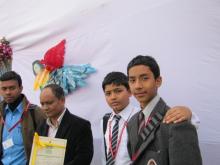 Four child scientist made Assam proud in the new year

22 Jan 2012 - 3:52pm | Monali Kakoty
Right at the beginning of the year, four child scientist made Assam proud with their projects adjudged among the best 25 of India, against a total of more than 650 projects participated from all over...

13 Jul 2016 - 4:18pm | AT News
BJP received a severe jolt when the Supreme Court on Wednesday ordered immediate restoration of the Nabam Tuki Government in Arunachal Pradesh a couple of months after he was dislodged by Kalikho Pul...